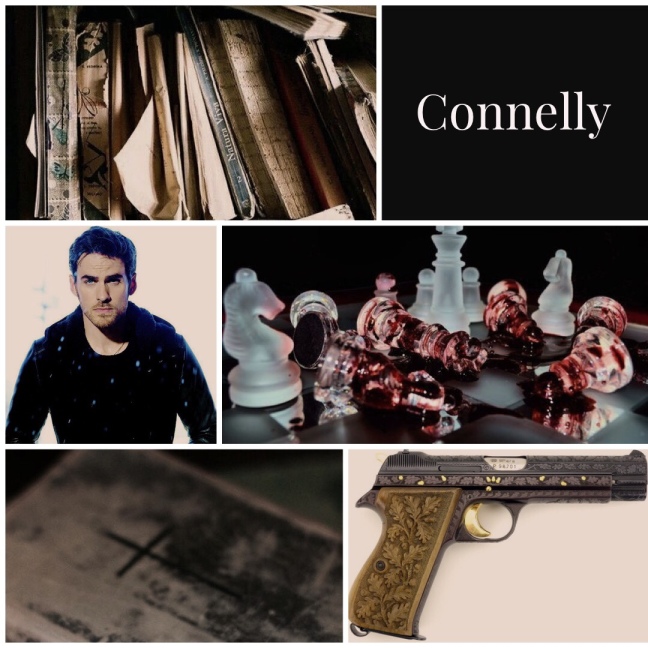 Connelly is one of my favorite characters to write.

He’s also the one I’m most likely to be found swearing at as he takes off in an absolutely unplanned direction.

Hell, he was only supposed to appear once, in Unexpected Returns, as a plot device. This one appearance was supposed to help get the idea out of my head, as I felt the cast was already full. He laughed in my face and set himself up as the villain for the next book.

He’s a bit of drama queen in that aspect.

He’s one of those characters that popped into my head nearly fully formed. I liked the duality of him having once been a priest, but who has been swayed by darker things and the idea of power. He’s also a bit of a Casanova, at least where Catherine is involved.

In Moving Pieces he is a full-on bastard, hiding secrets and playing the demon’s game like he was born to it. Any time he and Catherine are in a scene together it’s tense, from emotion, hate and want. He’s ruthless, doing what he has to to get what he wants, even if it means killing, or paying others to do the job for him. He’s manipulative and knows exactly how to get under Catherines skin in the worst way.

Piece by piece their background gets revealed. They met on a case when they were both fairly young, and both wanted to help save a missing child. When she found out that he wasn’t just a priest, she let her walls down a bit. He eventually distanced himself, spurred on by her coming and going, and started to place the hunt above her. There was a falling out after he sold a book to a higher bidder, when he realized that trades, and money, could get him further than his postion in the church. In his mind, he was still helping people, in a way, by arranging these deals and exchanging information. They would see each other again after that and pair up to screw over the demonic Lett at an auction, a night that stuck in Connelly’s mind and that he reminds her of throughout MP.

In Critical Position, he turns the tide a bit. It’s revealed why he did these things. What his motivations are. To be totally honest, I was even blown away by some of it.

More about the complicated past between these two is set to be revealed in the fifth book of the series, Breakthrough.

The Catherine Siddall Series on Amazon